Today we received word that our lab will be moving to the new research site at the end of October. Even though this pronouncement was delivered by upper management, it can be considered nothing more than a rumor until it actually happens. Too many unknowns exist for anyone to even guess at our move date. For one thing, the construction crews haven't even begun work on our lab yet. We are part of the third (and final) phase in the rollout plan and they haven't even finished the first two phases yet. As a further complication, our current building is being taken over by another set of tenants in the near future. If they show up early, we may find ourselves being thrown out early. And of course, knowing how this company works, it would not be surprising if some clueless upper manager somewhere arbitrarily changes the move date with little regard for how it might affect our projects.

I've talked about our move before, and while it will be great to get all of us (chemists, physicists, engineers, purchasing, IT, marketing, etc.) together in one building, I'm still going to have to endure some pain before everything is settled. Our group is not the only group waiting for their new labs to be finished. But those groups have not been given permission to stay in their labs any longer, so they will be moving into our already crowded lab for a few months.
Since I do stop over at the new location occasionally, I've begun to notice some of the annoyances that the new place will have to offer. First, while remodeling the building for our use, it was decided that a wireless intranet was the way to go. We still have network jacks at all our desks, but that's about it. None of the conference rooms had internet jacks installed. This isn't a problem if your laptop is wireless, but mine isn't. Nothing can quite describe the pure horror of having to attend a group meeting without having access to the internet. What the hell are we supposed to do during the boring parts of the meeting? Everyone else uses these meetings to go through their mail, read Dilbert cartoons, and check stock prices. It's just not fair! I've ordered a new laptop computer so hopefully this will not a problem by the time I move to the new location.
Parking is also going to be a problem at the new site. It's not like there aren't plenty of spaces available, it's just a matter of how far away you'll be from the building when you find a spot. This can be a significant issue during Michigan winters.
You have to use your magnetic security badges to unlock doors in order to go anywhere in the new building. No more just sticking it in your pocket and leaving it there all day.
Finally, there is this one guy at the main desk who insists on checking my laptop every time I leave in the evening. He actually checks the serial number on the bottom of the laptop with the number on my security badge. It's not like he hasn't seen me before with a laptop, and it's not like it would take me more than 5 minutes to fake the serial number on the laptop, but he insists on doing it every time. I can bypass this problem by exiting through one of the unmanned, security badge accessible side exits, but that puts me a lot farther from my car and will not be a favored option during the winter.
Additional note: Our old location is located within three miles of the four plant nurseries where I buy most of the flowers I plant every year. The new site has no nurseries anywhere near it. Damn! Obligatory garden picture follows: 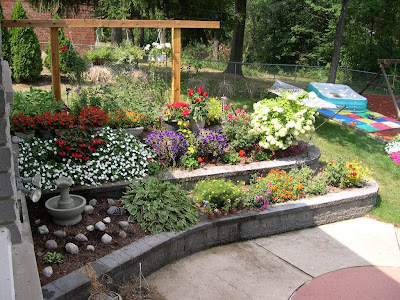 Holy Cow!!! We have the same kiddie swimming pool.

You can buy a USB adapter to provide your non-wireless computer with wireless internet, just as a thought.

On the other-hand, I shudder to think of moving our whole lab to a new location...

You're right Josh, but it's time to upgrade the computer anyway so I'm going to see if I can get that approved first.

Your garden looks awesome! I'd get into a car accident for that. (Though, given my driving record...that's not saying much.)