I really miss going to ACS meetings, but with chemistry not being as big a focus at my company anymore, it can be difficult to justify (to upper management) the expense of going to one unless there is a session directly related to my current project. I attended a session on reforming catalysts several years ago, but that’s been it for a while. Besides, my true love is aqueous transition metal chemistry and those types of talks can be few and far between. So imagine my surprise and delight when I ran across blogs discussing, not one, but two such talks being presented at this week’s national ACS meeting.

The first talk was mentioned on the Chemistry Blog, concerning a study to use chelating agents like EDDA to extract actinides from nuclear waste. YES! Good, old-fashioned aqueous transition metal chemistry. Okay, actinides aren't strictly transition metals, but they're close enough. I did find it amusing when Mitch wrote "These types of systems look promising and are a nice upgrade over traditional old-school extractors like tributylphosphate(TBP)." Any reference to classic chelating agents as "new-school" is music to my ears. To be honest though, I would have thought that these chelators, especially EDDA, would have been tested for this application a long time ago. At least it shows there are still applications for this type of chemistry yet to be discovered.

The second talk involved the use of Fe-TAML complexes to facilitate the oxidation of organic pollutants by hydrogen peroxide. Apparently these complexes are good mimcs of peroxidase enzymes. Here is the structure of the compound taken from the Collins group website: 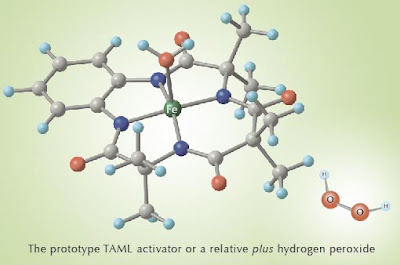 Although I haven't had the chance to read the mechanistic and kinetic work on these reactions yet, this seems like a classic example of the TAML group basically locking the Fe into a square planar configuration and keeping it stable while it’s shuttling back and forth between the +2 and +3 states as it facilitates the transfer of electrons between the H2O2 and the target molecule. I've always had a soft spot for chelating agents that lock themselves around metals in tight, specific configurations, significantly changing the metal's properties in the process. My first undergraduate project used an amine oxime to wrap itself around cobalt in a manner resembling the structure of cobalamin (B12 vitamin). Classic aqueous transition metal chemistry. It brings a tear to my eye.
Posted by Chemist Ken at 10:18 PM

hello friends! that good information is obtained in places like this, thank you all for making this a reality