I try to spend some time every day browsing through the various science reporting websites so as to receive my daily dose of science. I generally find them informative, but today I was greatly disappointed with the level of their quality. Science Daily reported the discovery of “an unusual molecule that is essential to the atmosphere's ability to break down pollutants, especially the compounds that cause acid rain.” "Okay," I thought, "that sounds interesting. I'll check it out." So I read through the entire article, several times, looking for the new molecule until I finally realized the molecule was never identified.

"Okay," I thought, "the writer screwed up. I'll just google some other articles."

Googling did indeed reveal many, many other sites which had covered this story. Unfortunately, it quickly became obvious that other sites weren't describing the molecule either. In fact, the articles were all identical copies of the original Purdue press release. No additional explanations, no deep dives into the subject matter, nothing but simple copying and pasting.

Now that is just plain laziness. I realize the internet is one huge morass of plagiarism -- it's not uncommon to find the same page duplicated over and over again when googling -- but I expect a little more from science news sites that are updated on a daily basis. At the end of the Science Daily article it reads: "Adapted from materials provided by Purdue University." By adapt, I assume they mean reformatted.

Of course, all this occurred because the Purdue press release had failed to identify the molecule. A full color ball and stick model of the molecule was presented, which the science sites dutifully reproduced, but there was a problem. I present the figure and its caption here. 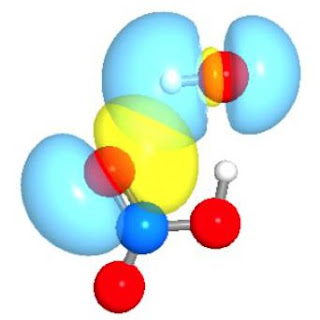 Image caption: Scientists at Purdue and Pennsylvania universities have discovered an atmospheric molecule that is essential to the breakdown of pollutants in the atmosphere. The molecule, which had not been seen before, is unusual because it has two hydrogen bonds. This image shows the structure of the molecule, with the blue ball being a nitrogen atom, red representing hydrogen atoms, white representing oxygen atoms, and the yellow clouds showing the location of the double hydrogen bonds. (Purdue News Service image/Joseph Francisco)

So the molecule was O-H-NH2? That sure looks like one hell of a reactive molecule. Who cares about a double hydrogen bond? We have a hydrogen with two covalent bonds -- a much bigger story. Or maybe the person writing the caption just got the colors for hydrogen and oxygen switched. I was able to figure out the molecule's identity by looking at the title of the abstract tacked on at the end of the press release. If any of the website writers had actually bothered to read this press release while pasting, this mistake would have easily been caught. BTW, the new molecule is an HONO2 + OH moiety, held together by hydrogen bonding.

I'm not trying to dump on Purdue here, mistakes like this can happen. I’m just disappointed that none of the science sites I frequent picked up on it.

Note: while writing this I noticed that the Science Daily report did list a link to the paper which included the terms OH and HONO2, so it wasn't totally necessary to go to the Purdue site to figure out what was going on.

I saw a recent paper in (IIRC) Applied Phys Lett that talked at length about the properties of a particular polymer but NEVER IDENTIFIED IT! You'd think journal editors would catch that, wouldn't you?

I have issues with Hydrogen being double bonded... Maybe because i am an undergrad, but i was taught that Hydrogen can only have one bond. Can somebody explain this to me?

I was just trying to be funny. There is no hydrogen double bond. The caption explaning the image got the colors for hydrogen and oxygen switched. The caption made it look like the molecule was OHNH2when they meant HONO2.

I've noticed stuff like this before too. Maybe not this bad, but bad enough.

I really think it is related to ignorance, scientific illiteracy and this: http://chemicalsabbatical.blogspot.com/2008/06/chemophobia.html

OK the link didn't work because I am an idiot.