Reverse osmosis is the technique generally used for the desalination of seawater. Unfortunately, the polyamide-based membranes typically used in these processes are attacked by chlorine, which complicates the purification process (meaning more expensive). Polysulfone-based membranes are resistant to chlorine, but their hydrophobicity means that water does not move well through them. Extra hydrophilic sulfone groups can be added to the polymer, but they tend to attach to the least stable sites, which limits their effectiveness. Now, two research groups have combined to solve these problems -- by using the remarkably simple idea of adding the polysulfone groups to the original monomers before polymerization.

Considering the lack of fresh water at locations around the world, anything that can help lower the cost of desalination can be a big deal. As I read this article, one country immediately came to mind -- Malta. Located 50 miles south of Sicily, the islands of Malta are the home country of my wife's parents. As a result, my wife and I have already visited Malta three times in the past 12 years. And believe me – it is hot! Since I think Michigan summers are too hot, you can only imagine what I think about our summer visits to Malta. Here is a family picture taken last summer in Malta. 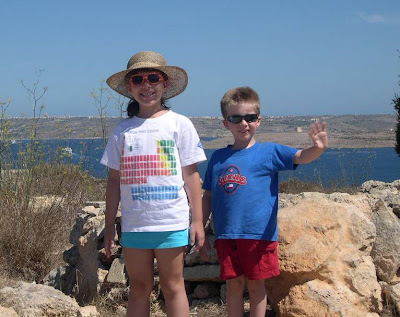 Not a lot of greenery around. Mars probably has more water in the soil than Malta. Notice my daughter's T-shirt. Never too early to start influencing them.

It turns out that due to the quantity and quality of their beaches, Malta is a common vacation spot for many Europeans, especially the British and Germans, who tend to spend all day at the beach before showing up later in the evening looking remarkably like broiled lobsters. The water quality was fine 12 years ago during our first visit, but the influx of tourists, along with an increased demand for water by the local residents, has apparently stressed the desalination plants. 5 years ago, during our second trip to Malta, the water was really too salty to drink and we essentially lived off of bottled water for two weeks. Last summer, although the water was getting better, we still stuck with the bottled water. It's weird being surrounded by all that water and yet having to import water from the mainland. I hope this new membrane will allow Malta to build a few more desalination plants before our next visit.
Posted by Chemist Ken at 4:43 PM