I hope everyone enjoyed the Labor Day weekend. We spent a lot of it cleaning out our basement, which translated into throwing out a lot of old stuff, most of it mine, and much of it items I didn't even remember having in the first place. One of the items was a desk that I've had since grad school in Missouri. No one was using it anymore, so we gave it to my wife's nephew who is beginning his freshman year at Lawrence Tech, so it's going to a good home. I originally bought the desk from another student who was leaving Missouri after graduating with a B.S. in chemistry. It was painted a rather bizarre looking green color, which meant no one other than another grad student would have felt comfortable bringing it back to their apartment.

While emptying the drawers, I came across some old pictures I had taken early in grad school - in particular, pictures of my old chemistry lab. They certainly brought back some (mostly) fond memories. There were pictures of my old chemistry building, my lab, and the old Nuclide isotope ratio mass spectrometer with which I performed most of my undergraduate and master's thesis work (and which now looks like a prop from a "B" science fiction movie). 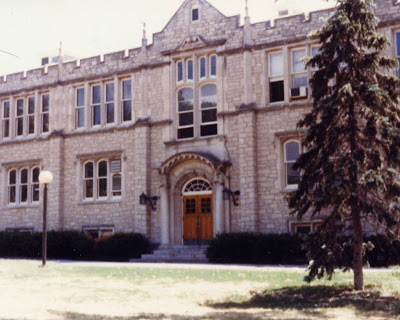 Schlundt Hall.
This was the building where I spent much of my life during grad school in Missouri. Schlundt Hall was known as the "old chem building" as opposed to the flashier new chemistry building which housed the organic, analytical, biochemical, and some of the other inorganic groups. Home to the main lecture hall and most of the freshman labs, it also contained several labs in the basement which were under the control of my advisor, R. Kent Murmann, who had no problem setting up undergraduate students in this rooms. Although Schlundt Hall was often looked down upon by some residents of the newer building, it just oozed with atmosphere (the good kind, not the kind generated by chemicals, ... at least I hope). It had that old style fortress/castle look to its architecture, including the crenellations (the notches in the wall from which archers could fire) on the roof (upon which you could walk if you knew how to pick the door locks -- which we did). This place could have been Hogwarts -- minus the magic and about half of the deathtraps. And since we were the only group in that part of the building, we basically had free reign to do as we wished. Perhaps I'll reveal some of the things that went on in that building at night in another post. In any case, the memories were great. 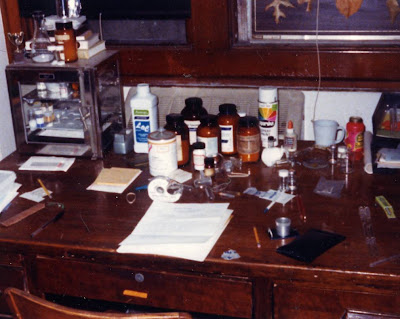 My Desk
If you think this desk is a little messy, you should have seen it before it was cleaned. Amanda over at "A Chemist's Laboratory Notebook" shows pictures of her desk at various times, but believe me, even 2 weeks before her thesis defense, her desk still looked better than mine on average. God knows what most of that stuff on my desk is. Yes, that is a can of diethyl ether sitting on the desk. Having chemicals occupying much of the desktop seemed normal at the time. I can only hope I didn't eat food at my desk very often. 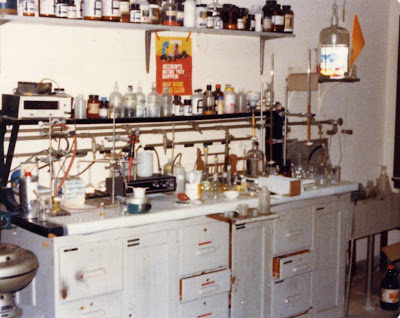 What can I say? I can only imagine what the bench looked like before I cleaned it up. The "Accidents Before They Happen" poster taped to the wall was probably placed there by my advisor. I suppose I could have a contest to see how many safety violations could be found in this picture, but that would only destroy the romance of the lab. Damn, I had access to a lot of chemicals back then. I'm lucky if I have more than 10 in my current lab at work. I'm definitely bummed about that.

If you are a graduate student, or an undergraduate with a lab, I suggest you take pictures of it before you leave. You'll be glad you did later.

When were you working with Dr. Murman? Does your last name begin with an R?