Yesterday we celebrated the one year anniversary of our cat Sierra. One year ago, we found her as an undernourished 2 month old kitten in my mother-in-law's back yard. Other than destroying a few glass vases, she's turned out to be a great cat. She was apparently weaned off her mother too soon, as her favorite pastime now is to suck on my wife's shirt sleeve whenever she gets a chance (as she is shown doing here). 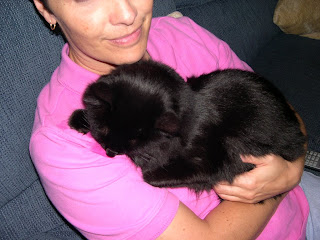 Several months ago there was an article on the blackest black pigment ever produced, using carbon nanotubes (IIRC). Back when Sierra was a kitten, before her coat became shiny, she probably could have challenged that claim. She was an absolute black hole as far as absorbing visible light. Taking photographs was almost pointless since all you'd see was an amorphous black mass, occasionally with two eyes showing, which let you know which end you were looking at.

Yes, but I can never get her to purr for me. She only purrs when she is sucking on my wife's sleeve, and then it's loud enough to wake the dead.

She is so cute!

That makes her even MORE adorable!

I work at the UPS store and everyday we ship out like 3 Xbox. Microsoft has an account with UPS. I know it's an Xbox when the customer is walking from the parking lot. They use a very distinctive white box. We have been getting them for like a year i think. You would think they would have fixed them all already.