Reports of nano-gold and its use as a catalytic material are beginning to pile up. Last week I mentioned nanogold particles in stained glass windows and their ability to oxidize organic pollutants. This week, two more articles showed up, here and here. Hmmm…. seems like we’re beginning to reach a critical mass here. Pretty good for a metal that hasn’t been considered a particularly good catalyst over the years. Perhaps I'll start paying more attention to this area. I’ve read articles about nano-particle based catalysts in the past and have generally been underwhelmed, but nano-gold catalysts may be about to change that view. And that’s because of two words that are often found in these reports.

Or at least, low temperature.

The obvious reason for using nano-particles is their much larger surface area to mass ratio. Higher surface areas generally mean better catalysts, so the drive to make smaller and smaller catalyst particles has been going on for decades. Back before “nano” became a marketing term, I recall at least one set of researchers making platinum nano-particle catalysts to improve the efficiencies of automotive exhaust catalysts. They succeeded, but unfortunately, at the high operating temperatures (generally above 400oC) to which these catalysts were subjected, the platinum nano-particles tended to move around and coalesce into much larger particles, losing much of their surface area and eventually not looking all that different from more crudely prepared catalysts. In fact, with these types of catalysts, research is focused less on the catalyst itself and more on the substrate which supports the catalyst -- changing its properties so as to limit the movement of the catalyst particles. This is always a bit of a balancing act since too much interaction between the catalyst and substrate can change the properties of the catalyst in undesirable ways. But if the reactions to be catalyzed take place near room temperature, or at least at lower temperatures, you stand a much better chance of maintaining the catalyst nanoparticles and hence their benefits.

Gold has traditionally been the forgotten metal, with all catalyst discussion centering on its neighbors on the periodic table (Pt, Pd, Rh, Re, Ru, and Ag). That looks like it's about to change. The big question to be answered: Why are nanogold particles so much better than bulk gold? Here are some possibilities to consider.

1. Larger surface areas. Well yes, you would expect some benefit here, but gold has been so unremarkable as a catalyst, I don’t believe a simple increase of surface area would account for this big of an effect. If it were that easy, everyone would just have dumped more gold into their catalyst formulations in order to increase the available surface area.

2. More defect sites. In many cases, catalysis only occurs at specific sites on the catalyst surface, such as the so-called "steps" as shown in the figure below. Perhaps nano-gold particles naturally have more of these locations. 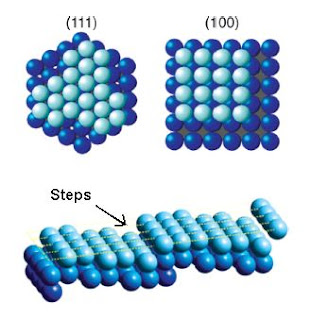 3. More of the appropriate crystal faces. Different lattice faces such as (111) or (100) often have significantly different catalytic rate constants. See figure above. Perhaps nano-gold particles have more of the correct lattice orientations at the defect sites than bulk gold.

4. Different surface oxide properties. One of the reasons metals like Pt and Rh make such good catalysts is their ability to maintain surfaces which are relatively clean of oxygen atoms. Whereas the early transition metals tend to form oxides, the late transition metals favor the metallic state. Heat vanadium or molybdenum in air and you form the oxides. Heat platinum or its salts in air and you wind up with platinum metal. Keeping the surface free of oxygen atoms makes the metal more available for catalyzing the desired reactions. Perhaps smaller gold particles tend to have less oxygen on their surface.

One thing I learned in undergrad inorganic was something about crystal defects in inorganic materials. The patterns propagate and follow the same patterns as found in M. C. Escher's art - those things where lizards change into swans.

The professor who taught the class had become a huge Escher fan after finding this out.

This blog is amazing!!!i stay impressive with the whole information because is absolutely interesting and wonderful. Simply wonderful. i love the the gold,because it drive me crazy. i can´t go out without buy some gold for me and i like to
buy viagra in other line because i like to enjoy my sexual life openly.