So, they are now making nano particles from volcanic lava.

When is this nano madness going to end?

Okay, so perhaps I'm exaggerating here a little bit. It would be more correct to say that Dang Sheng Su and his team are making nano particles using volcanic lava. Lava obtained from Mt. Etna in Sicily contains nanosized Fe2O3 particles, which can be reduced to iron nanoparticles at 700C in the presence of hydrogen. These iron particles are apparently good templates for the production of carbon nanotubes and nanofibers when exposed to ethylene and hydrogen at high temperatures.

I know I tend to rag on nano-technology a bit too much on this blog. My first post on nanoparticles wasn't too complimentary. But I've been coming around lately as I read more and more articles on the subject. Much of the research may eventually just turn out to be hype (which can probably be said about any emerging field), but it certainly seems as if there is a lot of potential in this area. Who knows? Maybe I'll be offered a job in nanotechnology sometime in the future. I wouldn't want my views on this blog to limit my opportunities. :)
--------------------------------------------------------

Back in 1803, John Dalton developed a series of atomic symbols for some of the known elements at that time. Here is his representation of the table of elements. It cannot be called a periodic table yet since it doesn't demonstrate the periodicity of the elements. 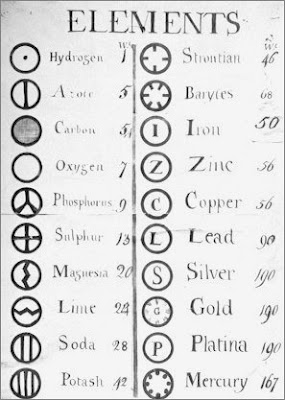 Now it's not like there wasn't already a series of symbols for most of these elements already. Alchemists had been using a set of elemental symbols for centuries before Dalton came along, but a lack of standardization was a significant problem, especially since alchemists often used many different symbols for the same element. Certainly, part of the problem was due to the lack of a central authority (IUPAC hadn’t been invented yet). There are at least 20 different versions of the symbol for gold that I know of, and probably a lot more. But the biggest roadblock to standardization among the alchemists was their need for secrecy. Treatises by alchemists were often ambiguous and confusing, apparently to confuse the competition. For example, alchemists often used the term "mercury" for the element mercury, the element gold, the liquid fraction of certain reactions, and various metaphysical concepts such as spiritual goodness. You really need a course to understand what these alchemists were trying to say.

I'm guessing that Dalton was doing his part to disassociate chemistry from the art of alchemy by refusing to use any of the common alchemical symbols of the time. Ironically, his symbol for hydrogen is the same as (one of) the alchemical symbols for gold. Remove the circle from the symbol for phosphorus and you have the alchemical symbol for phosphorus. His symbol for sulfur is the same as the alchemical planetary symbol of earth. Nevertheless, it was a start. It wasn't until Berzelius started using letters based on the Latin version of the element names that everything became manageable. Can you imagine writing out chemical formulas for large organic molecules using Dalton's symbols? If that wouldn't drive you toward Inorganic chemistry, then nothing would. ;P

Quite interesting blog. I love it. I think that It would be nice that you focus in the home chemistry. Because people don't know what they have at home and there are different uses that you give to those products to make your life easier and you don't have to waste a lot of money.

What will they use this nano technology for?