According to this article, scientists have developed a new method of forecasting cyclones in the Mediterranean Sea. This has nothing to do with chemistry, and I don't really care about the subject, but it does give me a chance to post a (rather poor) picture I took in Malta years ago. 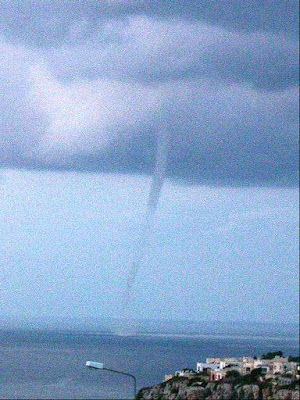 This waterspout appeared near the town of Mellieha (where we were staying) during the last day of our trip. As far as I know, it's the closest I've ever been to a tornado. We felt pretty safe from our vantage point, but I'm not sure the crew of the freighter (not shown) felt the same way. We flew out of Malta early the next morning -- fortunately -- since the resulting torrential rains shut down much of the island along with the airport.
-------------------------------------------------------------
Two new elemental podcast are now available at Chemistry World. This week's elements are zinc and radon.
Posted by Chemist Ken at 1:14 PM

Consider yourself lucky to have seen one at a safe distance and cure your craving to see one. Having grown up in Arkansas, I never understood why anyone would want to be within viewing distance. I have seen too many to count and the closest was a couple of hundred yards away, close enough to see the debris swirling. That was too scary to ever want to repeat.

Wow! I am really impressed..That is a really nice way to promote this kinds of things!!
stop smoking weed

I think that is great achievement that scientist find the method of forecasting cyclones in the Mediterranean Sea. Really Impressed.