I just ran across a discussion of errors, R values, and Gaussian distributions over at “The Curious Wavefunction” blog. Being able to estimate, understand, and interpret sources of experimental error is perhaps one of the most important skills you can develop. It can save your career, for one thing. I once attended an in-house presentation by a coworker who felt the need to explain what he was currently doing for the company. The coworker presented the following chart to summarize his data. 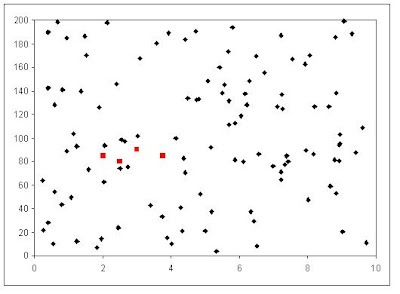 No, I’m not giving away valuable corporate data here. This chart is just something I whipped up using a random number generator, which, as it turns out, makes it a damn good representation of what we were shown at this presentation. Seriously. Members of the audience began looking at one another, wondering where this talk might be heading. Basically, the black dots represented the data under standard conditions (obviously noisy data), while the red dots represented the data after changing the variable of interest. After spending ten minutes describing the experimental procedure, he summed up his results by comparing the average of the standard data (black) with the average of the four red data points and then had the audacity to conclude that the variable did indeed have a small effect. Audacity is probably not the correct term here since that implies a certain knowledge on the part of the speaker as to the outrageousness of his statement. He was totally surprised by the general outrage displayed by certain members of the audience and the discussion became rather heated, which is rare at this company. Eventually, he countered with “Well, this is the data I got. What else can I say?”

A simple “My data is inconclusive” would have sufficed.

By the way, the guy no longer works at this company. To be honest, he left of his own accord and jumped to a new company, one which is actually in better financial shape than this one. He’s actually a nice guy and I wish him luck, especially since I may be calling on him for a job some day.