A few weeks ago, I attended a talk given by Professor John Yates at the local Michigan Catalysis Society meeting. John Yates (University of Virginia) is a well respected figure in the area of surface chemistry and catalysis. I hadn’t heard him speak before, but I was looking forward to it since, according to a friend of mine, John could make a talk on life insurance interesting. I was not disappointed. On a side note, he looks pretty damn good for someone in his 70's. His talk centered on self-assembled thiol complexes on gold surfaces. Interested parties might read the following paper: P. Maksymovych, D. C. Sorescu and J. T. Yates, Jr., “Gold-Adatom-Mediated Bonding in Self-Assembled Short-Chain Alkanethiolate Species on the Au(111) Surface,” Phys. Rev. Lett. 97, 146103 (2006).

John spent a fair amount of time discussing gold “adatoms.” What are adatoms, you ask? 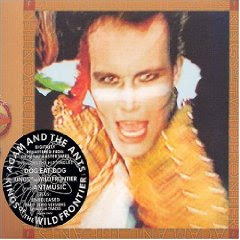 No. Not this guy.

An adatom is an “adsorbed atom” and is usually described as a single atom sitting on a crystal surface. Adatoms have been around for years, but I’d never heard of the term before, despite the fact that I’ve apparently been making them for years. Simply exposing Pt to a hydrogen molecule, for example, will lead to the formation of hydrogen adatoms on the Pt surface. Of course, many of us who work on catalyst development would not think of these as adatoms, since in our line of work, exposure to even tiny amounts of hydrogen would essentially cover the entire surface of the platinum with a layer of hydrogen atoms, which doesn’t really fit the adatom definition.

I see that I passed the one year anniversary of this blog back in January. It’s unfortunate that it occurred during a dry spell, but I’m happy the blog is still going. The percentage of blogs that last more than a year is fairly low, so I can’t complain.
Posted by Chemist Ken at 8:21 AM