Considering all the time I’ve spent gardening, it’s amazing how little I’ve thought about all the chemistry that surrounds me in the garden. Of course I realize there is a lot of organic and bioinorganic chemistry going on in the plants, but there is actually a fair amount of inorganic chemistry occurring in the soil itself. Almost 99% of a typical fertilizer consists of nitrogen, phosphorus, and potassium, but in order to survive, however, plants also need small amounts of magnesium, iron, calcium, boron, sulfur, copper, zinc, and manganese. Although these elements are usually present in the soil, their bioavailability isn’t always guaranteed. Most plants perform best in a pH range of 6-7.5 and much of this has to do with the availability of these trace elements as shown on the following chart obtained from this website. 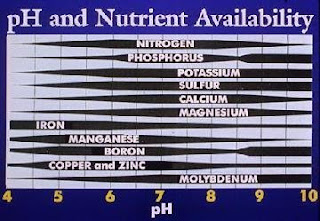 Much of this availability has to do with the form of the element. To be useful to the plant, the elements generally have to be in an ionic form, which is why some fertilizers chelate their metals. Nice healthy soils with lots of organic matter or clay essentially behave like ion exchange resins, holding on to and stabilizing the ionic species for eventual use by the plant. If the pH is too high, insoluble metal oxides (Cu, Fe, Mn) can form. If it’s too low, too much Al3+ is released from rocks, which displaces all the other elements on the ion exchange sites.
Redox properties can also have an effect. Well aerated and well drained soils tend to be oxidizing while wet, decomposing, clay soils tend to be reducing. In the presence of sulfur, anaerobic conditions lead to formation of insoluble metal sulfides. Anaerobic conditions also increase Fe availability by changing its oxidation state from Fe3+ to Fe2+ (which I assume makes it easier for its release from the ion absorption sites. There is a lot of complicated chemistry going on here.
I admit that I was totally unaware of any of this when I started gardening. In fact, the only reason I even know this much is due to having to understanding how to change soil pH. Lime is used to raise soil pH while iron salts and elemental sulfur are used to lower soil pH. The lime and iron reactions I understood from freshman chemistry, but sulfur? Gardeners would simply tell me that sulfur is acidic, but that obviously wasn't true. Eventually I guessed (correctly) that the sulfur oxidizes to SO2 which dissolves in water to make H2SO3.
What do I do with all this knowledge? Well, nothing really. I just plant the flowers, add Miracle-Gro, and hope everything grows.
Posted by Chemist Ken at 10:58 PM

If groundwater pH and soil pH are as closely related as it seems like they should be, the soil here is around 8ish. (Seriously, I don't think I've seen a single water sample from KY that's read less than 7.5.) Of course, we're sitting on a lot of limestone.
My father mentioned trying pine needles to lower soil pH for his blueberries (which aren't growing)...I wonder why that would work?

I've heard from a lot of gardeners that decomposing pine needles make the soil more acidic, hence why the ground under pine trees is bare.

But when I asked a soil chemist (I have pine trees in my backyard and its all dead under them) he said the acidity was a myth and that decomposing organic matter doesn't contribute much to overall pH (but can significantly effect the buffering capacity of course).

I would guess, for the blueberries, the pine needles are just acting as mulch.

I've always heard that pine needles lower the pH of the soil. Perhaps it's because pine trees like acidic soil. Sphagnum peat moss is supposed to do the same thing. As I mentioned in the blog, sulfur and iron salts are useful for lowering the pH.


Web Expert India are a popular and reputed website design and development company in India.Our Delhi based young professionals are highly dedicated and concentrate on availing quality services to our precious clients. We have a good clientage from all over India.
Website Designing Company in india
Thankyou