Yesterday, I drove through our local roundabout, carefully avoiding the confused driver who had stopped inside the roundabout desperately trying to decide what he should do. I live near a road which apparently has one of the highest incidents of traffic accidents in the state of Michigan. There are three main reasons for this distinction. First, this road is the only real access into this area from the main beltway and so traffic density can be quite high at times. Second, the first 4 miles of this road are lined with nothing but shopping malls and office buildings, which results in lots of drivers attempting left-hand turns across 3 lanes of traffic. Third, drivers in this area are generally stupid and do not understand why reason #2 is a bad thing. In an attempt to decrease the number of accidents as well as to facilitate traffic flow during rush hour, local governments have spent years trying to find a solution. Part of their solution involves the use of roundabouts.

Now I have nothing against roundabouts. They can do a great job solving traffic problems, and the increase in heart rate you get while looking out for other drivers is probably good for your heart. Nevertheless, placing them in this area of Michigan would seem to be a very bad idea. The viability of a roundabout depends upon drivers not only knowing who has the right of way but also knowing when they have it. Around here, the concept of right of way means that making left-hand turns across 3 lanes of oncoming traffic is allowed if you are aggressive (or oblivious) enough. Apparently realizing this problem, the construction plan called for only 2 roundabouts to be built initially, with more to be constructed after a suitable evaluation period. Those 2 roundabouts were completed a few months ago and surprisingly, the number of accidents has been less than I expected, and traffic flow seems to be faster than before, although this may be due to the avoidance of these intersections by a fair number of drivers. Of course, my wife has actually seen a car driving the wrong way around the roundabout, so there is still some excitement to be found here, but overall, it appears to be a success.

Since these roundabouts opened, I have felt a growing suspicion that there was something odd about them. These suspicions have continued to grow and a few days ago, I finally figured out what's going on here. Take a close look at a typical roundabout sign. 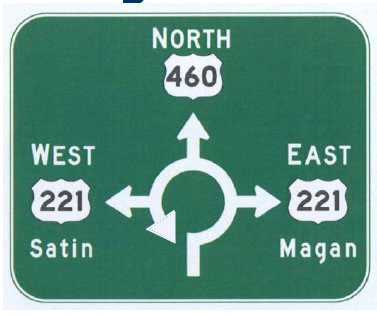 See anything familiar about it? No? Let's try looking at the traffic flow pattern. 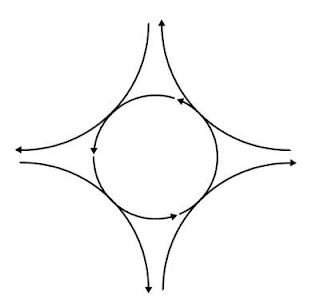 Look familiar yet? Still not seeing it? Does this help?

Coincidence? I think not!

Now I don't know why, but I think it's pretty obvious that roundabouts are part of some sort of conspiracy perpetrated by biochemists. Why? Who knows? Perhaps to prepare children for the inevitable biochem classes? Perhaps as a subliminal method to instill public trust in biochemists? I'm not sure what other explanation there can be. In addition, you will notice that biochemical cycles are almost always drawn in a clockwise fashion, which is the opposite of our traffic patterns here in the US. Obviously, British biochemists are behind this plot. There are numerous roundabout configurations out there - 5 way intersections, double roundabouts, etc. and I'm currently in the process of determining which biochemical cycles each type represents. The most complicated roundabout that I've found is located in Swindon, England and is known as the Magic Roundabout. It's traffic flow is shown here: 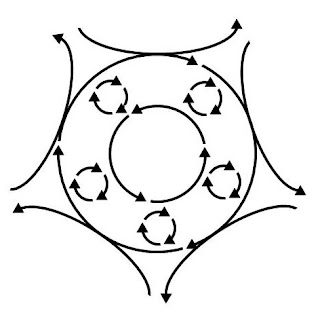 Now, I want the biochemists out there to tell me which biochemical cycle this roundabout represents.
Posted by Chemist Ken at 8:47 PM